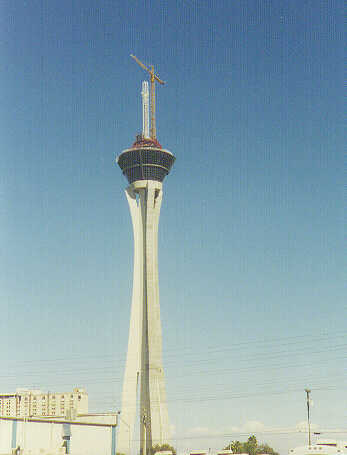 This is the new Las Vegas Stratosphere tower nearing completion, but still under construction as of September 1995. This picture shows the tower with half of it's outside coating applied (It will eventually be the lighter, almost white color of the left half). When it opens April 30, 1996, The World's Fair-themed Stratosphere will feature the tallest observation tower in the US,

dominating the Las Vegas skyline at 1149 ft. This places it higher than the Eiffel Tower, from the 1889 Exposition in Paris, Seattle's Space Needle from the 1962 Exposition AND San Antonio's Tower of the Americas, built for the HemisFair in 1968.

You can see the 12 story, glassed restaurant/Wedding chapel/Entertainment pod which will provide a stunning view of the entire strip and beyond to the south and of downtown to the north as it slowly revolves a full rotation each hour. You can also see the small 865 foot long roller coaster called "The High Roller" and "Space Shot" ride on top. The roller coaster will carry up to 36 riders at a time in nine cars, a total of 700 passengers/hour, making 3 clockwise rotations while banking sharply at a 32 degree angle. I understand the view will be great... if you can keep your eyes open long enough!. The "Space Shot" ride can be seen along side of the crane (the crane is red the ride is white). |Get a much better look| It is a zero-gravity simulator consisting of a 192 foot steel tower with a seat into which 16 riders are strapped before being catapulted very rapidly (about 45 miles per hour) 160 feet to the top and allowed to free-fall back to the launch pad at the bottom. The rider will experience g forces from less than 0 up to 4 g's.

The 1100+ foot tower was originally supposed to be considerably higher with another large section above the restaurant. However the FAA (Federal Aviation Administration) determined that building the Tower higher would put it directly in one of the alternate flight plans for McCarran airport (it's only a couple miles from McCarran airport), Instead Stratosphere Corp, decided to keep the height to a mere 135 stories and build the current attractions at the top instead, still making it the tallest building west of the Mississippi.

The tower stands just north of Sahara Blvd on Main Street right off the Las Vegas Strip on the old location of Vegas World Casino, the traditional "Top of the Strip". Completion is currently slated for the end of April, 1996.

UPDATE - SEPT 29, 1995: THE CRANE WILL FINALLY BE COMING DOWN! Living here in Las Vegas we were beginning to think the famous red, 400 ft crane at the top of the Stratosphere Tower was a permanent fixture. Starting at ground level it rose with the tower and at this time remains perched at the top. It has now been announced that beginning October 9 for about 2 months, through Thanksgiving the process of lowering the monster crane will begin.
|click here to read all the details| 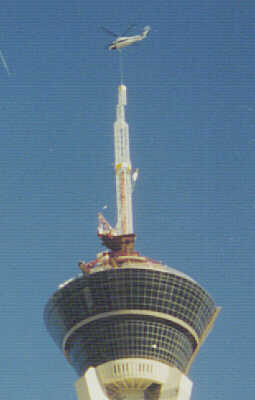 The top of the tower is added making the stratosphere tower at 1149 feet officially the highest building West of the Mississippi. Police directed traffic away from Las Vegas Blvd while the final section was hoisted to the top of the mast with the help of a very large helicopter after being dedicated and signed by local officials in a ceremony at ground level. Four workers made the final attachment as the helicopter hovered above. When the work was finished the helicopter flew off as a bright red signal flare marked the completion. 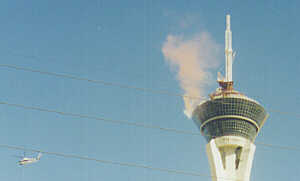 The top portion of the tower will eventually house a 220 seat cocktail lounge, three wedding chapels and indoor and outdoor observation decks. Access will be via four high-speed double decker elevators which will traverse the 800 feet in 40 seconds at a speed of 1400 feet per minute. 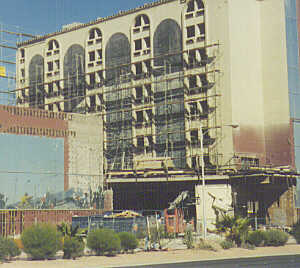 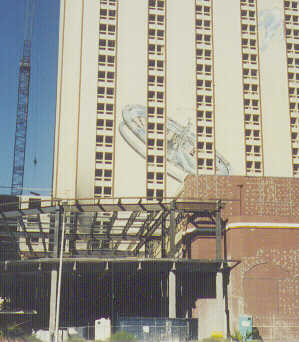 Meanwhile back on the ground, construction of the casino and hotel towers continues. The old Vegas World motif with roulette wheels, astronauts spacewalking and overwhelming views of the moon surface will be covered over with a more conservative cream-white paint job. The $500 million hotel, casino and entertainment complex will include about 1500 guestrooms, including 120 suites, 97,000 square feet of gaming space, a 500 seat "Around the World Buffet", and a spectacular 140,000 square-foot shopping mall. 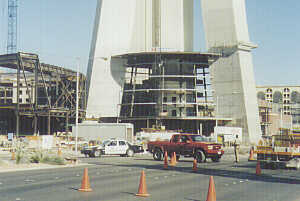 Casino Facilities Will Be "State-of-the-art"

UPDATE - NOVEMBER 24, 1995: Slick New Facilities Announced The Casino has some unique strategies planned to attract players. To start with, they will be installing over 2,400 slot machines making them the third largest slot capacity on the strip. And yes they will have everything from nickel slots up to $100 machines (the higher denomination machine players will have their own special room with a private lounge and personalized "champagne service", hors d'oeuvres and cocktails). And of course they'll have the obligatory slot players club. But beyond all this, Sean Sullivan, VP of Casino Operations, is planning what he calls the "New Release Zone"! This will allow guests to try out new casino games and give their opinions. There'll even be instructors on hand in case you need any help.

UPDATE - JANUARY 4, 1996: King Kong Meets Vegas! Plans have been announced to add yet another amusement attraction to the nearly complete stratosphere tower. The corporation admitted this week that a 60 foot gorilla ride, the brainchild of former Vegas World operator Bob Stupak and Lyle Berman, CEO of Grand Casinos, Inc, is a go-ahead. Although the whole thing is still in the design stage, the idea is that the animated gorilla will start from the second floor retail area, dragging behind him (or her?) a stylized cage seating up to 48 passengers. The gorilla's head arms and legs will all be animated and (s)he'll even be given a growl via a built-in sound system. Another planned thrill is a 3-foot, "slip" back down as the gorilla ascends toward it's peak height at over 600 feet, to "further terrorize the riders". Plans are for the ride to be ready by November 1996, just in time for the opening of an additional 1000 room tower (presumably to hold all those eager patrons lining up to ride King Kong).

UPDATE - JANUARY 12, 1996: King Kong Meets Vegas! (continued) A new, recent announcement by Mr. Stupak now indicates that the preferred arrangement is for the riders to sit on "bleachers" in the stomach of the gorilla and face in a southerly direction looking out over the Las Vegas strip. King Kong will apparently be climbing the southern leg of the tower.

Casino Will Be Arranged in World's Fair Type Pavilions

Also newly confirmed is that the casino itself will be split into "permanent World's Fair Themed Pavilions". Among those already in the works are ones with names like "Pavilion of Imagination", "Pavilion of the World" and the "Pavilion of Fun". These pavilions will incorporate state of the art technology and imaginative design to produce, amongst other things, 3-D murals of many cities from around the world, strolling minstrels and fair-like performances.

A January 16, 1996 announcement by Stratosphere Corp, describes the details of a programmed light show being installed during January. Included will be 15 - 7,000 watt xenon lights which will enblazen the legs of the tower with an array of 16 rotating colors. Meanwhile at the high-altitude end of the tower, a mile and a half of fiber optics will produce pulsing and chasing effects designed to make the "pod" on top appear from the ground to rotate while another half mile of LED lights will outline the roller coaster and thrill ride on top while over 50 strobe lights will outline the entire tower. The lights are being designed and installed by the same local company who crafted the works of light art at the Luxor, Bally's, Buffalo Bill's and Treasure Island. The lights will be getting a good testing over the next month or two and are expected to be completed by March, so keep an eye out to the north while roaming the strip on upcoming visits. They should also be quite visible by sighting straight down Las Vegas Blvd when downtown.


If your Las Vegas hotel, casino, restaurant or establishment has new major construction, public activities (sorry, slot tournaments and bingo night don't count) or other interesting tidbits to offer, send them to us on company letterhead and if we think LVLG readers will be amazed, astounded, or even slightly interested we'll publish it. Make sure to send LOTS of pictures and written permission to publish them! We love pictures!