Pictured above is an artist's rendering of the new Fremont Street Experience due for completion in the winter of 1995. Click on the thumbprint to the right to see what the project (as of 9/20/95) looked like in real life from approximately the same angle.(69K) 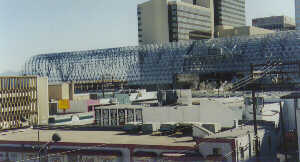 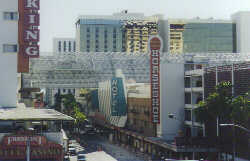 Lumbering across the downtown skyline like a silvery caterpillar 5 stories up, the lighted canopy will be a new attraction to the downtown Las Vegas area. 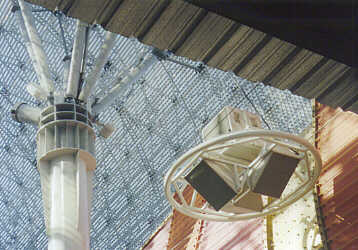 This incredible $70 million project will include a light and sound show of unparalleled stature, utilizing an impressive 2.1 million lights and 40,000 watts of sound from speakers like those pictured here. It will be about 1500 feet long and nearly 100 feet high

Photogenic Fremont Street, located in the heart of downtown Las Vegas, will be transformed into a "people place" offering a unique blend of festival entertainment, patio cafes and shopping in addition to the variety of activities offered in the many famous casino resorts included within the Experience.

Views into both ends of the Fremont Experience

(Look East from the Plaza Hotel, 90K)
The Eastward view shows the first portion of the project to be completed where the block dedication and ribbon cutting ceremony was scheduled to be held Sept. 22. However the ceremony was cancelled due to unusually high humidity over the previous weeks which caused the concrete on the ground to be not quite cured enough for heavy traffic.

The project was intentionally completed in stages starting from the West end toward the East. The canopy on the East end was finished, while the floor was still dirt. If you click on the thumb print(55K) you'll see the final remaining 100 ft without lights attached (the portion of the picture to the left of the support post has lights while that to right does not). All the lights are now installed and a number of shops have started moving in. 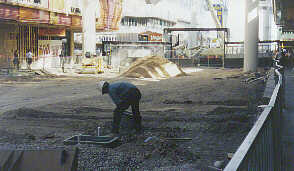 The mall-like floor is now finished. Here, a workman prepares water and electrical utilites, before the concrete was poured, for the many trees which will be in the "mall" area. 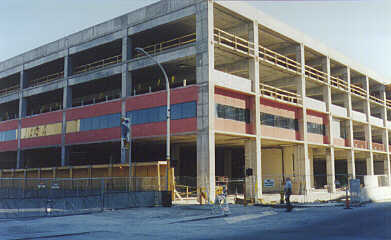 At the East end of Fremont street a Parking Plaza is being constructed to accomodate 1500 vehicles to handle the new parking requirements. The "Parking Plaza" area was completed at the end of October encompassing Fremont Street between Fourth Street and Las Vegas Blvd and is now open for parking. Fourth Street will remain open to traffic after completion. The lower level of the parking structure will eventually also house small shops and vendors.

Testing of the light shows and sound systems has been proceeding pretty much every night during the beginning of December including some special performances related to the National Finals Rodeo. The unofficial schedule is a 5-10 minute show every hour on the hour from 6:00pm until 11:00pm each night. If you catch one show, you might want to stick around for the next as there are a number of entirely different shows depending upon the season and special events going on in town.

To describe it, if you're standing at one end of the 4 block structure looking toward the other end, think of it as a VERY long, about half-res, television, screen displaying video games. In nearly all of the show segments the same images are repeated, side by side about 10 times over the 4 block length so that everyone is able to see a similar picture. The sound is of a quite tolerable level and uniform throughout the structure, but barely audible more than half a block away. We WILL be adding a page of photos depicting the shows now that we have obtained permisssion, as soon as we can get to processing the pictures.

There have already been a series of special events held at the new attraction including a worldwide travel agent familiarization tour of about 1500 agents on December 10th. The actual VIP Invitational Grand Opening with lights and sound is officially scheduled for December 13! There will be a pre-grand opening Chamber of Commerce Mixer the evening before (December 12) beginning somewhere between 5:00pm and 7:00pm.

If you are planning on attending the New Year's Eve festivities at the Fremont Experience this year, complete with a planned special canopy-displayed midnight count-down, be aware that, as of the writing of this page, there are plans to charge a $10 per person cover charge for entry to the Fremont Experience for that evening.

But this isn't just a FUTURE destination. Right now, today, there are great bargains to be had in accomodations and dining at all of the downtown area hotels while construction is proceeding. Check with the following downtown hotels for their current offerings:


If your Las Vegas hotel, casino, restaurant or establishment has new major construction, public activities (sorry, slot tournaments and bingo night don't count) or other interesting tidbits to offer, send them to us on company letterhead and if we think LVLG readers will be amazed, astounded, or even slightly interested we'll publish it. Make sure to send LOTS of pictures! We love pictures!