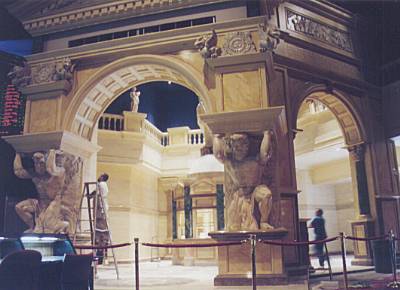 Caesars' Palace has finally torn down the first wall around nearly a years' worth of construction on the Magical Empire April 9, 1996. Revealed was the new entry to the fantastic attraction. Immediately to the right of the previously existing sportsbook now stands the entry and ticket booth garnished with mysterious and awesome, romanesque figures and blending magically with the surrounding decor. Workers were still putting the finishing touches on Hercules and other details as we took these pictures. 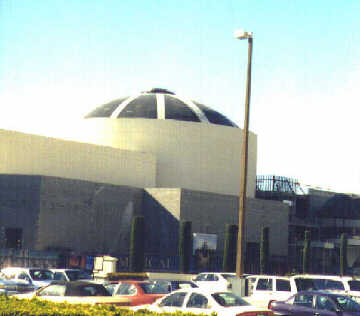 This is an outside view of the new Caesars Palace's Magical Empire. The domed area to the right, is where the "giant fireball" feature and Lumineria special effects show resides in the "Sanctum Secorum" area. The dining area is located to the left.

See the September 1, 1995 Press release from Phil Cooper, Vice President of Public Relations and Advertising at Caesars Palace with information about the forthcoming Magical Empire 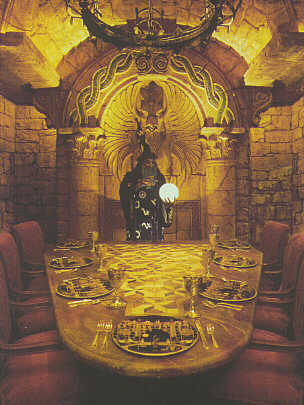 Caesars Magical Empire will transport guests back 2,000 years to a time reminiscent of Caesar's world through the presentation of mysterious surroundings, fine-dining, and grand-scale illusions. Entry to the Magical Empire will be through the Celestial Court, but the adventure really begins in "The Chamber of Destiny". Here the prospective diners experience their first illusion as they experience the entire room whisking them down, down into a deep underground "Catacomb Maze", as the narrator tells of the fictional history of Caesars Magical Empire.

Once in the catacombs, visitors are escorted through a maze of hallways filled with artifacts and the enormous entryways to the 10 "Dining Chambers of the Gods". Each Dining Chamber seats up to 24 guests for a three-course feast of delicacies. Throughout the meal guests will be entertained by a resident sorcerer host, who will make eating utensils, waiters and possibly even guests, appear, disappear and beckon to his every command. 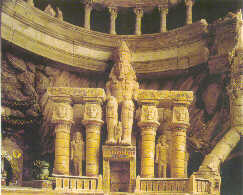 (Detail 125K JPG) But this is not merely a dining room, this is an entire magical experience! After the meal, the guests are free to wander the many other amazing attractions within. Just outside the dining chamber is the centerpiece of the Magical Empire known as the Sanctum Secorum, a circular playground of illusion. In the center will be an impressive 70 foot giant fireball pouring from a grotto under the main rotunda. The Luminaria show will be "an enchanting combination of sound, light, dancing fire and a visit by great Caesar himself". 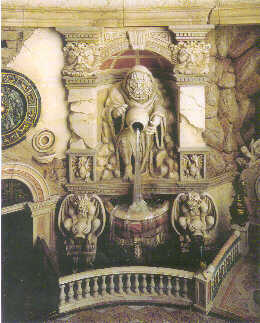 (Detail 152K JPG) A fifty foot sage will preside over a constantly flowing, floating vessel of water. A dragon's mouth cave off the main rotunda conceals the Grotto Bar (complete with a haunted piano that plays guest requests) and a second lounge called the Spirit Bar houses two seance rooms. At this time we were unable to get details on another attraction called the Forbidden Crypt... sounds interesting. Each bar will have it's own illusions and surprises to explore. 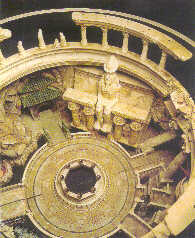 (Detail 169K JPG) There will also be two small theatres in the magical empire. The Secret Pagoda (the entrance is visible to the left of the large statue here and partially cut off on the left of the picture further up the page) is the smaller theatre and will present masters of "close-up" magic in an intimate 75-seat, 20-minute show, setting. The larger theatre, The Sultans Palace (The entrance is visible below, to the right of the water pouring sage), will hold 150 guests for 1/2 hour shows of top magicians. 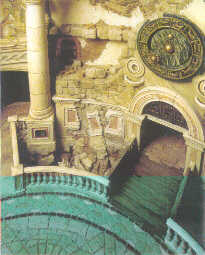 (Detail 165K JPG) To return to reality the astonished guests will pass through the "Infinity Hallway" for final transportation to the surface, with a stop, of course, at "Caesars Magical Emporium" to pick up that souvenir or magical item to take home with them. 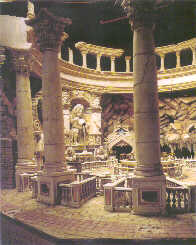 Overall the new attraction encompasses more than 66,000 square feet, and is designed to accomodate up to 2400 people a day. For a single admission price (about $50 for lunch and $70 for dinner) guests will be treated to all this as well as dinner or lunch with private wizard for a total 3-hour presentation. It is physically located at the front of Caesars Palace, facing the Las Vegas Strip and will have its own parking available we are told. Inside the casino it is located between the Olympiad Race Book and the Palatium Buffet. For more information or advance reservations, call 1-800-CP MAGIC (1-800-276-2442) (Please make sure to mention you saw it in the Las Vegas Leisure Guide).

Except for outside view, and entry shots all pictures on this page were generously supplied to LVLG by Caesars Palace. We thank them. Interior photos are from an extraordinarily detailed model commissioned by Caesars Palace to be true to the final product. The more you look at these detailed pictures the more subtle pictures and objects you'll notice coming out of the rocks, shadows, designs, etc. Dining room photo is an artists concept painting.

If your Las Vegas hotel, casino, restaurant or establishment has new major construction, public activities (sorry, slot tournaments and bingo night don't count) or other interesting tidbits to offer, send them to us on company letterhead and if we think LVLG readers will be amazed, astounded, or even slightly interested we'll publish it. Make sure to send LOTS of pictures with written permission to publish them! We love pictures!